The Consequence of all the Failures that Chase me 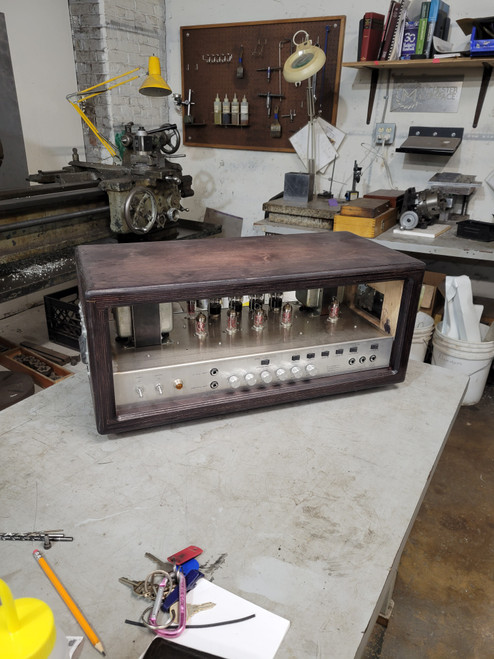 The Consequence of all the Failures that Chase me

This amplifier is my take on the Ampeg V4, but with a ton of very important improvements.  Overall, the tone circuit and topology of the original design is maintained; but more options have been added, obsolete or unobtainable parts have been swapped for parts that are identical in circuit and sound but easily sourced, and tour worthiness or dependability of the overall design and power circuit have been vastly overhauled.

The essential design elements are:

There are still some changes that will be put into the amp from the photos of the design / build, but overall the prototype is really hitting all the essential marks that need to be hit.  It is really well enunciated, the ever powerful active mid controls are as responsive as ever, and the lows are absolutely absurd.  I'm overall much happier with this build than I was with the V4; for the overall stability of the parts within and the additional controls.

If you have questions about this amplifier, please send a message.  There is a lot of crazy details here, and it is a wild ride to get into.  I'm extreamely happy with the overall performance of this death machine.

These are going to be made as a first come / first serve basis.  I have capped the total ammount available to 5 of each transformer type, and won't be adjusting that until those orders are completed.  I expect to take about 6 months to line them up and get them done, but could take upwards of 9 months depending on tube supplies.  If all of them get picked up super fast, I will probably get them done first thing; but my expectation is an order or two trickling in, so work will be sporatic on them.  That said, I have delivered every order that has ever been placed with me; sometimes a couple months late, but have always exceeded customer's expectations and will continue to do so for this amplifier.

So, for those of us that want to dig into every absolute detail of this amplifier, I will go over every engineering detail here.  Starting from the outside in, lets dig it apart

This may seem like a small detail, but the mechanical properties of the amp are often the first look and feel of how people overall feel about an amp.  I don't want to miss any details here, to make sure that you know the parts of the design I find important, and the parts that can be changed to fit your own aesthetic.

Again, I know it's nuanced but part selection is a big detail for making sure the amplifier is road worthy.

There are several modifications to the overall design of the circuit.  Essential here was keeping it able to be run standard, while cleaning up several things that aren't bad but overall make the design unreliable.  While we are adjusting things inside the circuit, it made sense to increase the overall options.

If a part of the circuit was not mentioned, assume that it is stock like a V4